Or is it possibly ahead? An interesting question, isn’t it?

I am in a privileged position. I live in Montreal, but I spend a few months a year in France, where I was born and raised. And I help small food businesses with their US and Canadian food packaging, so, naturally, I am curious to compare European food labels with U.S. or Canadian food labels.

I have also lived in the USA for 10 years where I owned a small food business.

In the USA, nutritional information on food packaging has existed since 1994 and the 2016 new rules were the first major change since its conception. Regulators have learned from 20 years of experience.

In Europe, on the contrary, nutrition facts are only mandatory with the new regulation which came in effect in December 2016. (For products which already had nutritional information, the changes were effective in December 2014).

Regulations on food labels are designed to provide consumers with unbiased, accurate information on what they eat, and help them to make healthy food choices.

At first glance, the approach of both jurisdictions is extremely different, though.

Europe provides consumers with information on a few nutrients, whereas the USA (and Canada) nutrition facts list more nutrients, along with some “tools” to help consumers understand how much they eat and how many calories they get in one serving of food. How many calories are there actually in this pint of Ben & Jerry’s ice-cream you just ate?

So, who got it right?

Let us dig deeper into details of these food labels and let me share some opinions on the decisions European legislators have made vs. what we see in North-America.

Here are the facts about European food packaging and labels, as per the EU legislation, COMPARED with US-Canada labeling:

It could be argued that “less is more”.

For instance, the nutrition table clearly focuses on the most important nutrients. However, we can regret the absence of “fiber”. The omission of “cholesterol” is also noticeable, but in the view of the complexity of the science in terms of the impact of cholesterol on health, there must be reasoning behind this omission.

On the other hand, without any mandatory indication of serving size and reference amounts, it is difficult for consumers to make sense of the numbers, only expressed in grams of nutrients for 100 g of food.

It is surprising not to see better nutrition information in Europe, where a number of countries are very health-conscious when it comes to food (Denmark’s consumers buy three times more organic food than the US consumer, Sweden buys twice as much. Seven out of the top 10 countries in terms of consumption of organic food are members of the EU. Source: Statista – Per capita revenues of organic food worldwide.)

It is also surprising when you see that, on the other hand, food packaging gives very detailed information on recycling (in France at least). It describes, for each component of the packaging, whether it is recyclable or not, and even when it is not recyclable, it reminds consumers to “think about recycling”.

How can we explain the focus on recycling vs. nutrition information on food packaging?

I will venture to say that in an “old” Europe where the density of populations is higher than in the great spaces of North-America, recycling is certainly more critical.

And, on the other hand, obesity, diabetes, and other health problems related to food are more severe in America than in Europe, hence the efforts to help consumers understand and influence what they eat. Americans definitely eat larger portions and too much fat and sugar. With nearly 30 million diabetics (almost 11% of American adults), the USA has the highest prevalence of diabetes among all developed countries (Source: Daily Mail).

It remains to be seen if nutritional information on food packages has a positive effect on health. Studies have been made on that topic, and the answer is not as obvious as you may think.

Another topic of interest is the use of Nutri-Scores, shown on the front of packages, and which simply gives a score from A to E to the food, in terms of nutrition and health. The European Commission published a report on that topic in May 2020.

But these are topics for future articles.

To learn more about the new 2016 US and Canada food labeling regulations, read our article: “USA and Canada Food Labeling: 2016 New Regulations”

Need some field research for your food products? Need American or Canadian-compliant food labels, compliant with the new 2016 regulations? Feel free to contact us. We can help.

Want to pin this article? 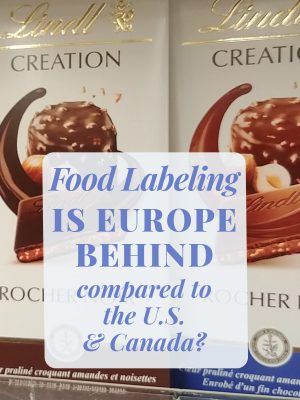 Analytical, passionate, and curious, I have “on the ground” entrepreneur’s experience in several industries.

My “boutique” web and branding agency has helped small businesses since 2003.
And I owned a specialty food business for 3 years.

I have lived in Montreal, in Vermont (USA), in France and in China.

Now, I want to help!
Check out how we can help.